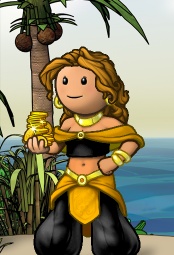 Butter is a pirate on the Viridian Ocean.

Butter was once a member of the crew Hell Avengers. Later, she moved on to become a senior officer and tactician of the crew The Viridian Lords, and a lady of the flag Silent Rampage.

Butter has always been a fun, happy and friendly pirate on the Viridian Ocean. She has many friends and hearties, as well as the respect of her former and present crew members.

Butter is now a senior officer and tactician of the crew Anarchy, and a member of the flag South of Sanity. She is also ranked as a lieutenant commander in the Dragon's Nest Navy in the Jade Archipelago. Butter is also a skellie hunter on the SHAVe list, and has achieved an ultimate puzzle standing in poker.