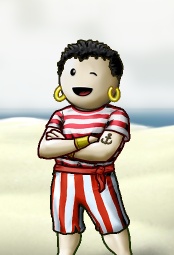 Bulletfire was a pirate on the Hunter Ocean. He was a senior officer of the crew Band of Brothers and lord of the flag New Dawn Rising. This pirate has been deleted.

Bulletfire first came onto Hunter ocean in summer 2006, after his real life friend had told him about the game. He originally started out under the name of Dmd, but by Christmas 2007 he felt he needed a change, thus creating Bulletfire. Some of the crews he first took place in included Eternal Fire, Spirits of Those Fallen, Hot Blooded (short term) and he attempted to rebuild the crew Seven Seas Brigands. Also in the time he has spent on Hunter, he created his own crew named Dark Knights which were then to merge with the crew Eternal Fire following his co-captain, Randomoct's, decision.

Bulletfire lead to a lot of problems pretty much from the very start of his playing life. Problems begun with Bestbuddy and Icematic (now known as Wall) and in his first crew where he had met Randomoct there had been a lot of friction between Bulletfire and Kokox. A lot of personal problems proved to be a target for some of his earlier enemies, but these problems were overcome and the idea behind creating the pirate Bulletfire was to leave those problems behind. After merging his crew with Eternal Fire Bulletfire had met problems with some of the crew members, then being kicked out by the captain.

Along the way, Bulletfire managed to pick up a lot of friends in his piratey life, most of which he still knows today. Despite his disputes with Kokox and Wall, they had managed to maintain being friends until himself and Kokox separated. Up to this point he and Wall are still in touch, and Randomoct is as well after returning from a long-term break of the game. One friend he met along the way was Babieselina, of the crew Venus. For a brief spell he joined the crew and met Thawix and Angelinake, who he was later to fall out with. Another important friend he met along the way was Macknintendo, who taught him a lot of knowledge about the game. Macknintendo also taught Bulletfire to be respectful and to work hard, things that have stayed with him up to this point. Problems with Mack's captain, Thebigmattb, led to Bullet leaving, until Matt had left and Bullet rejoined. This led to him meeting Blackrippa who he, eventually, managed to get along with.

The first key point that endured Bulletfire's pirate life was meeting Randomoct, who managed to show him how the game worked and how to improve. The next major point was when he created his own crew, but two of the main things that made Bulletfire improve was spending time in the crews Skull Bashers, and El Cielo Azul, where he managed to learn the higher points of the game and make a new friend in Hazadaki. The main feature of all his pirate life though, was meeting Macknintendo who managed to teach him so much about the game and help him train to become better. This is before he left to rejoin old friends in The Force Unleashed.