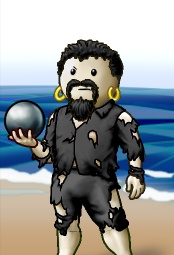 This page is protected because it is linked to in-game from the Brontes memorial on Jorvik Island, Midnight Ocean. To suggest changes, please use Talk:Brontes.

Brontes served as senior officer of the crew Death's Gate and lord of the flag Death's Banner from late 2005 to mid 2006. During this time, he also served as governor of Jorvik Island through some of its most tumultuous and controversial times. Brontes was the themed character alternate of player Barnie.

Who Wants to Be Governor?

With 2005 wearing on, the fate of Jorvik Island on the Midnight Ocean grew into question. Already in this year, Jorvik had been subject to seven blockades, changed hands four times, been an intricate part in the ongoing Scallywag War, and been involved in the banning of a very high profile player, Robertdonald. The Ocean Masters decided it was time to take the island out of player control. Thus, Brontes would be born.

In early August, Jorvik island was ceded by then owners Shattered Faith to the Ocean Master controlled flag Death's Banner with its themed character king, Hades, installed as governor. One month later, Hades' second in command, Minthe, announced on the forums that there would be a competition to decide the new governor of Jorvik. Prominent player Barnie won the competition and was installed as governor under the newly created themed character Brontes shortly after.[1]

This governorship was twinged with a slight bit of irony as Barnie was a member of the flag Looterati; the original flag to hold Jorvik before the Scallywag War wrested it from their hands months earlier.

The Governorship of Jorvik

Brontes' governorship of Jorvik was everything that he promised in his contest entry and more. Promptly after he was installed, Brontes ran a contest to build and name a furnisher bazaar.[2] Chippendale was then built on Jorvik allowing the new economic boom, furniture and housing accessories, to be available to the residents of Jorvik. Not long after, the first furniture shoppe was built on the island rounding off the overall island economic balance. True to his word, the palace was kept stocked with rum and shot in ample supply and at reasonable prices and he made sure that fruit was readily available for the enterprising merchant to run fruit from Jorvik to all corners of the Midnight Ocean.

Taxes were low, commerce was high, and for the first time in quite a long time, the citizens and shoppe keeps of Jorvik were happy. Often times, Brontes could be seen on the docks of Jorvik planning his next competition or gubernatorial move. He rarely spoke, and often times when he did it didn't make much sense; but Brontes' positive impact on Jorvik during those months was undeniable.

The Fading of an Era

The new year dawned and the Ocean Masters decided to give a player controlled Jorvik one last chance. An ultimatum was made: one blockade, one chance, winner take all. If a player flag could take the island from Death's Banner, then it would be opened to blockades and player colonization. If no player flag could take it, then it would remain in the hands of Death's Banner forever.[3]

Brontes coordinated the defense along with assistance from Hades' lieutenants and former player turned software engineer, Lizthegrey. So on March 25, the first blockade to hit the harbor of Jorvik in over nine months began with three flags taking the field: Tyr's Own, a long time seeker of Jorvik Island since Azure times; Broadsiders, a newer flag broken off from the established flag of Carpe Noctem attempting to take their first island; and Death's Banner on the defense. Brontes served as admiral that day and despite a valiant effort by Death's Banner, the highly under supplied and undermanned defense did not take a round.

Thus Jorvik XII ended and Tyr's Own stood victorious on the island's shores celebrating their victory. Brontes, his governorship come to a close, stood as well on the docks of Jorvik congratulating the winners and thanking his faithful defense force by awarding them with special trinkets commemorating the event.

The governorship of Brontes ended with a bang. In the many months he had spent directing the affairs of the island, the economy had boomed with the placement of the new furnisher bazaar and shoppes, many contests and competitions were held for the ocean to enjoy and win prizes and money, and Jorvik was put back into player hands in much better condition than it had left it. Brontes retired happy and content with his contributions to Jorvik Island.

The Loss of a Legend

Sadly, the player behind Brontes, Barnie, and his third character Bodmin, was killed in a traffic accident one month after the blockade of Jorvik on April 25, 2006. Immediately, this loss was felt by the puzzle pirates community as thread after thread sprang up on the forums in tribute and condolence to him. Bia called for suggestions as to an appropriate memorial to be placed on the shores of Jorvik in his memory. Many fine suggestions were made. Some large and grandiose, some small and simple, all heartfelt and sincere. Finally, after months of planning, a memorial sprang up on the docks of Jorvik on November 26, 2007 in memory of Brontes.

Brontes, Barnie, and Bodmin served in one of the highest profile offices on the Midnight Ocean as governor of Jorvik. He took an island tossed in turmoil and war and turned it into an economic center for all to enjoy. He honored his friends, his crew, and his flag by being a fun, caring, and active member of the puzzle pirate community. He spread his joy to all those who knew him and left an undying and brilliant mark on the Midnight Ocean.

In the aftermath of the loss of Brontes, the citizens of the Midnight Ocean all sought to honor him in their own special way. Threads, Shanty Raid-io broadcasts, poems, and art were all created to preserve the memory of their friend. These are just some of those tributes.

A poem written by Malk and posted on the forums accompanied by a picture drawn in tribute by puzzle pirate artist Kingpriam:[4]

In happiness and in sadness 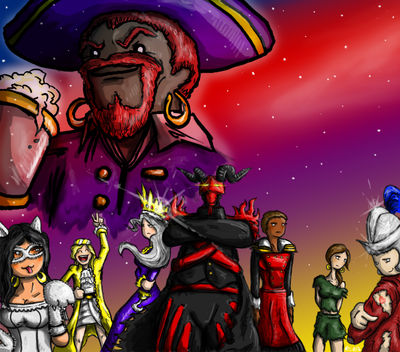 We knew this bravest buccaneer
He was always in our thoughts
We loved him, held him dear

We must keep in mind
That time will heal all sorrows
We weep tonight, we cry
And we still will tomorrow

But what has happened, did
We cannot fix nor change that
We eulogize and remember
And in respect, we tip our hat

I sign this letter with sorrow in my heart
From all who cared for Barnie like for their own
And from all those who haven't met him yet, but should have
We send this poem to honor him, let it be known

We send our deepest condolences to Barnie's lovely wife Kmf, and his family. You will be in our thoughts tonight.

Other tributes offered by the community: