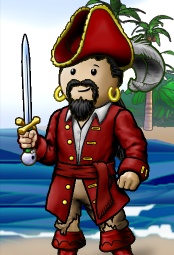 Brock used to be a well-known pirate on the Viridian Ocean. This pirate has been deleted.

Brock started out his pirate career as a greenie, in the crew Port Authority under the flag Pirates Gone Wild. Being a greenie though, he got himself expelled by Tristan on a soloing sloop. He drifted between jobbing, aspiring to build his own crew through hard work, until Nexis noticed him one day and decided to give him a job in Anxiety. He joined as an officer, and honed his pirate skills from then on. He worked his way up to senior officer, among the ranks of such pirates as Repus and Detmitchell. While he was captain of the crew Anxiety he earned himself royalty in the flag Infierno De Los Diablos. From then on he was well-known and became close friends with Antix, Macgreggor, Rayn and many more.

Captaincy was rotated in a confusion of leadership, until it settled upon Wolfgangpaco, who served shortly and relinquished captaincy to Brock. Brock captained the fine crew for a fair amount of time, increasing its prestige and size, but ultimately beginning to dwindle. Brock stepped down as captain to Johnnyrico, under his own retirement from the job, but stayed as a senior officer in the crew. Shortly after, however, issues in the crew caused him to leave for Midnight Sky.

Blako, the captain at the time, made him a senior officer, but shortly left the crew in Brock's hands, as he again became a captain. From then on he started the crew Midnight Sky and married Sunnyone. Shortly after passed captaincy to Jennah when he decided to quit.