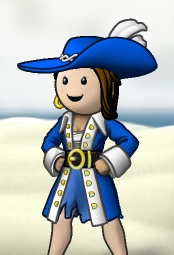 Blair started playing Puzzle Pirates in 2006. With the help of Bozeman, Blair found her place with Team Zissou. Becoming addicted immediately, She advanced through the crew and was named a senior officer.

Blair formed a new crew, Bartholomew's Revenge, which was named after her rat, Bartholomew.

Blair can usually be found behind a trusty cannon loading guns or in her shops, Blair's Tailoring Stall and Blair's Weaving Stall on Lagniappe buying clothes. She shares a house with Bozeman on Lagniappe as well.

Because of her love for gunning, Blair has achieved the navy rank of Admiral and was awarded the golden cannon for her hard work and dedication towards Gunnery. Blair is always eager to help out a fellow mate, but you will rarely see her performing Carpentry as she dreads it more than anything. Currently Blair is working on the winged shoes trophy and memming the oceans. Blair has also found a new love in jobbing for the Cursed Isles and hunting for sea monsters. So, if pirates ever need a good worker, she is their girl.