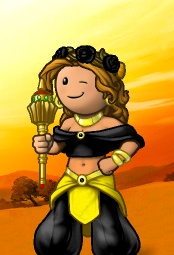 Bigbertha, also widely known as "BB", started playing Y!PP in March 2005. She started out on Viridian and currently plays as Beebe on Sage. She started out in Ghosts of the Seven Seas, where she was trained as an officer by Apparitius and Lorthar.

After learning the ropes, she and Fishwithafly established Phantom Cutthroats on October 26, 2005, where she was a senior officer. After Fish's semi-retirement in May 2006, Bigbertha became the captain.

Bigbertha was recruited by Calais about a week after Vanguard was created, and became one of the three heads of that flag: Calais, Ochubb, and herself.

Bigbertha was named the governor of Napi Peak after Vanguard's succesful effort at Napi III.

After many successful defenses and attacks, Bigbertha chose to begin working on a flag on Sage with Shodan, who returned from retirement from the game, and Novo. The flag is named Passive Aggression, and, since its creation, it has won numerous blockades and currently owns 5 islands. Bigbertha stepped down as queen and governor of Napi and handed Napi over to one of Vanguard's princes, Tempestblitz. She now plays as Beebe on Sage and logs on Viridian to maintain her crew, run her occassional, wacky pillages, and spam Vanguard /fo.

Bigbertha has established herself as a major player on the blockade scene. She has admiralled in the following blockades: