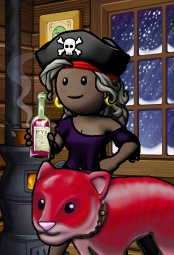 Betty is senior officer and mascot of the crew Top Shelf; she is also princess of the flag Brenda on the Obsidian Ocean. Disputes arise just as to how she claimed the flag, from bribery, illicit liaisons, bewitching of cabin boys and girls ocean wide, to a personal favorite: she ruthlessly killed the previous queen in such a dark and macabre fashion, no one else would dare take up the mantle.

What little information that has been gathered from Betty's initial foray into Obsidian has been scant. Rumors circulate that she bears some connection to a long-time Viridian pirate that cannot be confirmed at this point. What pirates do know, is Betty was one of the first pirates in the mad rush to populate this new realm. She had landed on Port Venture docks, in slight disarray, with nothing but a pair of rags, a foil and plenty of dandruff. Accompanied initially by her partner in crime Tayes they sought out former connections from Viridian. Joining up with notorious gunner Rodeb, every penny is a prisoner Callmecudi and the reclusive Scoz. They formed the backbone of what was to grow to be Epidemic.

With ambitions to blockade, but wary of the pitfalls of rushing into joining a flag, Epidemic ran solo for a time. The added benefit of this patience was it created a unity within the crew, numbers swelled, as did ambition. With the collapse of Versus Terminus, Amateur Hour had sprung up. Like a Phoneix from the ashes. At its head the pretty-in-pink Seepnah, alongside the silver-tongued Luxory, Epidemic joined up in that initial wave of excitement, a flag that was to be reckoned with. But somehow among it all, things turned sour. No facts have arisen, as of yet, as to why Epidemic parted ways with the flag. Had Betty been a diva and demanded that the entire flag use Skin Tone elixirs, for all to take on her image? Had Rodeb dropped a cannonball on Triplepat's toe? Or was it just simply that Tayes felt that he carried off the color pink with far more daring and beauty than Seepnah could ever hope?

Regardless of this, Epidemic did not find themselves in the wilderness for much longer; this rag-tag bunch of the mad, the bad and dangerous-to-know. They created a flag in the image of a personal hero of Betty's, whom many already know: Brenda; November 4, 2017, was to be the date.

What the future holds for Betty one cannot even imagine thinking: a keen participant in Kraken hunts, pirates rarely find her clean of ink. Or a drinking mug in hand. This is but the beginning chapter in the tale of this pirate.

"A dark time comes, her time. If it offends you, stop her!"