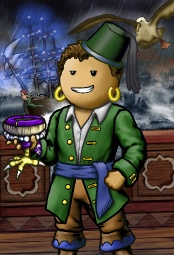 Axeassin is a strange, strange man that got washed ashore the islands of Viridian back in 2009. He was once known by the name "Killerhand", a pirate of mediocre notoriety, but relatively active in sea monster hunts. That pirate has long since died in the hands of The Purge... but was reborn as this goon here. Twice. Today he's a common face around the Meridian ocean, and the captain of ghost-town crew Magnum Opus.

It all began in 2009. To be fair, it began much earlier, but the "earlier" lasted around 15 minutes at best. Back in this year, "Killerhand" woke up in the strange and populous sands of Kirin Island. Beginning as a rather mediocre worker on basic pillages, he gathered as much money as he could potentially muster in his pockets. He quickly grew fond of sea monster hunts, and proceeded to always mantain a Bravery Badge close to his chest, so he too could tap onto the riches of these mysterious waters.

Suddenly, Killerhand realized something great: he was fantastic at Rigging!

A whole slew of opportunities opened to the young enthusiast after he obtained his first (and only) ultimate trophy: he was now seen as elite, being called to much more difficult missions and adventures, and subsequently to much better cash. He later discovered he has a very dextrous hand at Gunnery, Duty Navigation and Rumble. With the cash he saved, a nice and tidy set of clothes were acquired, as well as his very first sloop: Creative Shad. From then, officer ranking was a no-brainer: his life of captaining was about to begin.

For months he sailed across the oceans, memorizing routes, raiding merchant ships, and even trading fruit cargo with trading enthusiast Navys. He then obtained a longship, and proceeded to rake in good cash for many fortunate pirates who worked for him and his friends... until he quit the game. Killerhand got subsequently purged for never buying doubloons.

Regret over the decision of quitting came very late upon the pirate, upon noticing Puzzle Pirates was on Steam. Willing to give the game another chance, he revived the poor soul with steam-powered life supporters: his name was Axeassin. A pirate who inherited many of its traits, and also built greatly over them. Success was guaranteed once more, with the new pirate reaching up senior officer rank of a few distinct crews, and getting the chance to navigate much larger ships in battle.

But one fateful day, the life support failed! It would not budge at all! This truly seemed like the end of him once again, and it seemingly was. That version of YPP suddenly began to malfunction and fail to recognize the old Steam accounts, forcing him to begin anew.

Axeassin was a desolate man. Much of his previous conquests were never obtained again, and fond memories of far-gone events cloud his mind, as no one else shall remember him for those. Jolly rogers... banners... holiday souvenirs... all vanished forever. He would be in the fifth jolly roger today. Once a fairly strong tactician on Viridian, he was now but a lowly hobo on Meridian, after some clever sailors figured out the Malachite ocean was a day's sail away from them. Would he give up? Most definitely not. But not as much steam filled his heart.

He joined a fairly strong and notorious crew to make new acquaintances, and maintained himself neutral to the drama that ensured for its final days. A few crew members wanted the captain's head for not being very active, while others just wanted to enjoy good fun without caring for piratical notoriety. After joining a rather dubious flag who warred many others, everyone's ships were in grave danger, for the sinking player-on-player strife was inevitable: the other flags actively hunted him and his mates down. They would not tolerate this debauchery!

And so, See No Evil was born. Led by Carbones, the flag promised a nice and clean parlor for those who just wanted a free life. Axeassin, together with Navys and Zacsafus, formed Magnum Opus, a crew with similar philosophies. However, by this point, the oceans seemed less... populous. People moved on, shook off the pirate life, and left a big portion of these free-warring lands in limbo. What point was there in any conquests when no one was there to care? What point is there in being notorious when it's nothing but a title you flaunt to tailors and furnishers so they attach more golden bling to your purchases?

Weren't for the smaller groups still present, this whole life would seem wasteful. And it still does. But Axeassin persists... his lunatic body now shambling through whatever remotely interesting things are still going on. Has he gone mad? No... he was born mad.

Today he captains a ghost crew and likes to pretend he's good at Patching. Also, he likes to wear a fez.