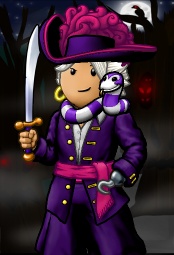 Carbones is one of the many pirates in Puzzle Pirates. This pirate may be found on the Meridian Ocean and the Emerald Ocean.

Carbones, A.K.A Jed created his character on December 16, 2012. The first time he played, he already had an idea of what to do, but still asked questions anyway since the game has updated a lot since the past. He still remembers when PoE was harder to earn and doubloons were at least 780 PoE per 1.

He first started out as any other regular greenie, with navy missions and raising statistics for the better. He was unaware of the new/alternative skills, like Rigging, or Patching. During his navy missions, he met a fellow named Patmann, which was also his first crew recruiter into the crew The Silver Sea Dragons. he then met his first captain, and several other nice pirates in the crew. His first captain was Dragonsilver. At first he was a nice guy along with all of the other members, until something happened later in life that can not be forgiven at all. He also met other crew members, such as Desiala, Juicyfruity, Revival, and many more.

Months later after achieving the rank of fleet officer in the crew, he gained enough money, fame, and higher statistics to work with being a captain again. He created an older crew named Angels Bane, which only had a month of settling before merging with a crew named Why So Serious. This crew is where he learned a lot more, and met even more pirates than he did before, such as Mysticalme, Seattleangel, Rifleshader, Alorena, and many more pirates to see.

During this time, the crew joined the flag Indifference. This was the hardest time for him because of all the drama that was about to break out during that time. Meanwhile, he continues to keep his head up and stay in the crew for as long as he can. he also became royalty of this flag, but then left later due to too much drama in the flag, and the crew.

Later on, he created his own crew, and his own flag in doubt of ever seeing drama again, since that was his rule for a very long time. He finally came out and created Biohazard, along with the flag See No Evil, which he is now the king, and loyal captain of them.

Today, he is actively managing his crew and his flag very well as well as the alliances he is in with the flag.