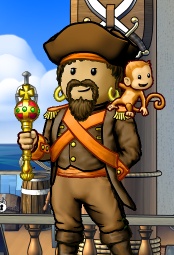 Attesmythe, often referred to as atteSmythe (or simply "atte" or "Smythe"), is a fleet officer of the crew Pirates of the Damned adventuring on the Cerulean Ocean.

Never having focused on puzzling, Attesmythe's specialties have been in the community. Starting his career in the beta development stage, he became the fourth captain of Black Opal after Cleaver intervened to replace the crew's prior, vanished head. He is also tied with Chihiro for the longest-serving monarch of Silver Dawn, of which he was the third. After retiring from the monarchy, he was granted titled status. This he retained until leaving the flag over personal disagreements, three months later.

As Silver Dawn's monarch, he strove to increase intraflag communication, for the establishment of close, personal alliances, for crews' rights to play the game, and for personal responsibility. He believes in openess in negotiations and that roleplaying the grandeur of the flag-as-nation should extend to forums only, and expects the same in return.

Although somewhat soured on the meta-game after the disastrous end of his career in Silver Dawn, he still regards those days as his some of his finest spent in Puzzle Pirates. His return to the political arena was an attempt to balance the political and piratical. As king of Notorious Fandango, one goal from his prior stint at monarch remained: To fight for crews' and pirates' right to play the game.

On a wider scale, Attesmythe believes in giving back to the community, and has through volunteer moderating, formerly greeting, programming projects, active forum participation, and now via the wiki.