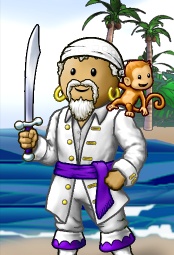 Arctic started on the Sage Ocean in late August, 2005. From there he joined Phals. Becoming a senior officer, he left to help Lords of Chaos. When the captain of Lords of Chaos, Tamorin, stepped down, Arctic was assigned as captain. Leaving Lords of Chaos, Arctic appointed Keep as captain and went to help his long time friend, Jeanie, start her new crew, Cielo Ardente. Eventually Arctic decided it was time to split from Jeanie and start his own crew, Soaring Eagles. In recent times, Arctic has decided it is time to let his good friend Madice, put his own stamp on Soaring Eagles and has stepped down from captaincy. After a long break, Arctic returned to sail on Sage Ocean once again.