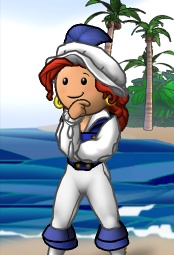 Jeanie is the captain of Darkened Embers and queen of Distant Shore Legacy. She sails the Sage Ocean.

Having been in Sage since August 2005, she's been quite a busy girl. She was first a crew member of Phals and went up in the ranks from cabin person to a "non-gunning pirate" and then all the way up to senior officer.

More recently she decided to try her hand at having her own crew, so she moved on to create a new crew, Cielo Ardente, and the crew has recently been added to the flag League of Light, and she is very excited about the crew's future there with so many wonderful ladies and gentlemen to get to know and grow with. After a long and happy life in League of Light with friends she'll always adore, she decided that for herself and the crew, it needed a new horizon.

On January 16th of 2007 she decided to branch off and make another new crew Darkened Embers which followed with the flag Distant Shore Legacy on January 24th. After about 2 weeks of waiting to give the crew time to decide where they wished to be, she merged Cielo into the new horizons of Darkened Embers.

Thus the Jeanie saga closes the curtain, but not for always, just the interim, til more wonderful things happen.