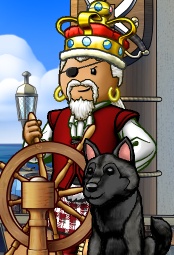 Al as a boy, with his mother Marie, sister Lillythanne and father, the 7th Earl of Peabody

On the Emerald Ocean

On the Meridian Ocean

Al owns 3 ships on Emerald, 2 'clever' sloops and a cutter, all of which are standard named.

A descendant of Scottish nobility, Aloy (or Al) became a victim of politics when he was denied a lordship due to the lack of available titles. When returning to his family castle after a trip to Edinburgh, he chanced upon a Druid priestess who told him he would find fame, fortune, love, and much more by venturing to the Americas. She also told him that a distant descendant would someday sail on a ship between the stars, which only confirmed his belief that most druids were a bit daft. Still, he thought the idea of finding his fortune in lands far away was a fine one, and he set sail for pirate waters.

He landed on the shores of Sayers Rock and started doing what any green pirate does, learning his skills with the local Navy, and earning his POE while pillaging with his fellow pirates. His adventures eventually lead him to Aimuari Island, which he chose as his new home in the Hunter ocean. After one rather successful voyage, he was approached by Shugardaddy, a senior officer with the crew Star Fleet, and offered a position on his crew. Remembering what the Druid Priestess said about his descendant serving with "Star Fleet", he took it as a good omen and joined the crew. Sadly, Al's time with Star Fleet was brief, as flag politics sent his mentor Shugardaddy to another flag and crew. While mulling his options in the Inn one evening, Al was approached by Deapthroat who offered him, not only a senior officer position, but a lordship title with his flag. Al quickly aggreed, and joined on with Iron Phoenix. The words of the priestess were coming true, he had found fame and fortune, and he also found a dusky island beauty he named Suzysunshine. He and Suzy bought a cottage on Aimuari, which they shared with Al's sister Lillythanne, who came over from Scotland shortly after Al did. Unfortunately, Al's new found family and their adventures were taking up a lot of his time, and he was demoted to officer in his crew. Al was disappointed with that, as it came with no warning whatsoever, but as he was still a titled member of the flag, he took the demotion in stride. Then Deapthroat sold his flag, and Al found himself without title. After talking with Suzy, they decided to leave the crew and work as independents for a while.

During this time, our intrepid adventurers had also been visiting other oceans. They were invited to Sage by pirates Lillyth (as her alter-ego Youngfreya) had met while exploring the frigid waters of the Ice ocean. There, Al joined the crew of Txfemme, and started setting up a home on Sage for his family. He also found the true adventure that could be had in the Sea Monster Hunt, traveling into the murky waters as often as fortune would take him. He paid the price for his lust for adventure, losing first an eye, and then a hand to the dangers of the deep. Still, he wears his injuries proudly, and continues to tempt fate often. He purchased a cottage on Bowditch Island, and introduced Suzy and Lillyth to the charms of his new community. Time passed, and Txfemme was lured away by the siren song of faerie adventures, so Sunsfire, Tonigirl, and Ruxie invited him to join their crew, Noxia Voluptatis, while Belyn, Sweetpant and Queeg enticed Suzy to join theirs, Sea Hawks. When "real world" problems started affecting Tonigirl's ability to pirate, Al was drafted to become the new King of Unltimate Vigilantes, until such time as Tonigirl could return to her duties. Tonigirl's prolonged absence led to a decline in the crew, so it was merged with the crew Iceholes, ending Al's tenure as king. In the end it all worked out for the best, as Al was promoted to a royalty position in the flag MORGANS REALM, a top 10 flag on Sage. When Tro resigned as captain, Iceholes moved from the flag Morgan's Realm to the flag Twisted Parallax (the number 1 flag on the ocean), and Al lost his royalty position again. Still, being part of the top flag on Sage is an honor, and Al has enough pictures of himself wearing a crown.

Meanwhile, back on Hunter, the family discussed the possibility of cashing out their belongings and leaving the ocean entirely. Pirating on multiple oceans was consuming a lot of their time, and the biggest reason keeping them on Hunter was the well paid jobs they all had managed to secure. Then, while looking for Seamonster Hunting opportunities, Suzy met up with Exportacus, a heartie from a previous pillage. He invited her to his crews meeting area, where he and his captain Meijinn offered her a position with their crew. She had them invite Al, and the two of them joined the crew of Phantom of the Ocean, as officer and pirate. Al was then further promoted to senior officer in the crew, thus giving him and his family a reason to remain on Hunter. (When Meijinn started sailing the waters of Sage, Al returned the favor and made her a Fleet Officer in Noxia Voluptatis. She, in turn, promoted Al to Senior officer in her crew.) Unfortunately, the well paying jobs are dwarfed by the escalating dub prices, so the family has begun pulling out of Hunter.

After hearing tales of low doubloon prices on Malachite, the intrepid trio setup shop there, in hopes of making extra POE to send to the other oceans. But with dub prices rising, and well paying jobs hard to find, they have begun limiting the amount of time they spend there.