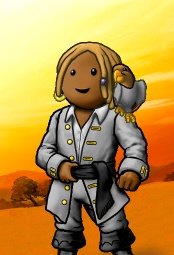 Alemar is a pirate on the Midnight Ocean. He owns Drink or Swim on Epsilon Island.

Alemdar first tried out Y!PP in April 2004. In September he subscribed as Ottomaniac and joined the crew Technicolor Naysayers under the flag Technicolor Armada. Sparrowslady was captain, Islegris king. In November he founded Maniac Cutthroats with Islegris' alt Alexrow and Blakedude, aka Blakecool/Blakeo. In January -05 he deleted Ottomaniac and started over again as Vanbasten. He joined The Legends, till he moved to Cobalt in March, as Alemdar. After a month he returned to Midnight again, and kept the name from Cobalt. Again he joined The Legends and quickly became First Mate. In January -06 he left the crew to join Angels' Forbid, where he stayed till May, when he joined Dead Men Tell No Tales. In August he remade the crew Maniac Cutthoats, and got quite a few talented players to join him.