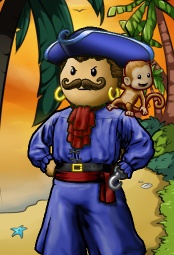 Aeville is a pirate on the Meridian Ocean, on the Emerald Ocean, and on the Obsidian Ocean; he started in the Viridian Ocean and lived through its merger into Meridian. His activity on any other ocean was secondary until Meridian became mostly inactive in 2017. He first learned to make trouble under the tutelage of the now-banned Pirate King Zilverdragon.

The following haiku was composed after losing a blockade of Prolix Purlieu. Aeville had been governor of that island. Notwithstanding the stirring haiku, the island was not recovered by Infamous, and Aeville eventually left that flag.

This haiku was composed for his departure from Last Call:

This haiku was composed after several of the stalls in the "stall empire" were lost because of absence: