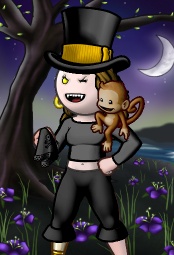 Acai is a senior officer of the crew Crime Syndicate and member of the flag ROARRR on the Meridian Ocean. She is also an admiral in the Lima Island Navy in the Jade Archipelago.

Acai, formerly known as Exquisites, was a captain of the crew Affluence and queen of the flag The Argent Dawn. She sailed the Viridian Ocean for years, although every so often, she went on unintended hiatus. Up until mid-2009, she was an independent pirate, never finding a crew she felt that she could be happy with, but she eventually joined Ocean Envy, and after a couple of months she decided to start her own with Affluence.

Exquisites was renamed as Annbella on February 1, 2012, a day after Viridian Ocean was merged into the Meridian Ocean. Annbella was once again renamed to Acai years later.