The /Speak command is one of several ways a pirate can communicate with other pirates. Speak mode is the standard chat channel, and is commonly used in inns and outdoors on islands.

Speak is the only command which is affected by a pirate's location.

Speak mode has the following syntax:

Speak mode can be combined with the three modifier commands - /think, /shout, and /emote:

Note that pirates can not use /shout from certain locations. See shout for details.

An example of the Speak command. Note how Speak appears in the chat window but also generates a speech bubble in the scene containing the message text. 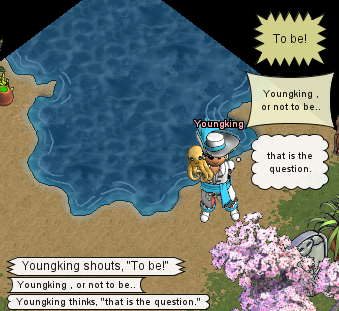 Appearance of the Speak command, when combined with the Shout, Emote, and Think commands.

All messages sent via Speak mode appear in the chat window, and also generate a chat bubble above the pirate who is speaking. These bubbles only displays the message text, and do not include the "Piratename says" portion nor the quotes. Only those able to hear the message will be able to see the chat bubble.

Who can use this command

Where can this command be used

Who can hear messages sent with this command