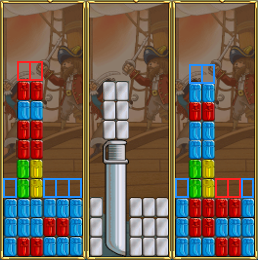 A visualization between the reversed and non-reversed Saber.

The saber is one of the seventeen sword types available to players in the game. It is produced at iron mongers. On subscription oceans, the saber may only be used by subscribers.

Sabers are notorious for disrupting pirate's abilities to play the game by smothering them with a barrage of bichrome attacks that often completely bury their board - leaving them unable to act.

Due to the fast playstyle of a saber, those bichrome attacks often overlap and leave the receiving player with no choice but to play fast enough to get the critical clear all while having to maintain connection between the pieces.

Getting a fitting breaker for the bichrome board under constant attacks may take a lot of turns and often results in a onesided game:

Getting the breaker almost always results in a forced clear and -unless combo'd massively - often deals little to no damage and is very easy to predict.

Unfortunately, its very common that the breaker comes too late or not at all, resulting in a premature death with a fully gem'd board and 0 counterplay.

The saber is packed with an insanely strong middle strike and astronomically good alternating sprinkles in 4 of its columns. Especially those sprinkles make the saber incredibly deadly, even moreso if the board is in an uneven state. They are disjointed by nature and losing access to a connected & organized center column often means even further reliance on bichrome breakers. While the massive corner strikes are weak, the small corner strikes do their job - they cut off the bichrome colors by introducing a new color.

The saber can also be a very effective team swordfighting weapon. Teammates using complementary colors can attack with patterns that are very difficult to clear. While this can be said of any sword, the effect is much more pronounced with the saber since each pattern of sword is generally only weak to one colored breaker, whereas most swords are weak to two or more. This tactic was first employed with success by Jacktheblack's team, Saber Dance, during OCL Team Brawl Season 5.

Using a saber is generally very frowned upon and pirates will actively go out of their way to boot saber users from their tables, even in team swordfights. As a matter of fact, it was even banned in all of the competitive OSL tournaments due to its poor gameplay experience.