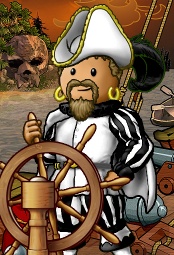 Easway is a pirate of the crew Twisted Glory and a member of the flag Sins of the Flesh on the Hunter Ocean.

Easway entered the Sage Ocean serving as a pirate under the name Stinger. After earning his way up the ranks, he achieved the rank of fleet officer. Unfortunately, that crew was disbanded. He then moved on to serve under Cxela as his senior officer and first mate.

He contined playing on Sage until the creation of The Black Fog Pirates. He served with them until he switched to the Hunter Ocean where he was captain of a crew in the flag Vicious until he merged it into the crew Shadows of Destiny. In that crew he became a senior officer and first mate.

A few more months had passed and Spiritual came back, took back control of the crew and merged it with the crew Poseiden's Fury. The crew was soon renamed to Twisted Glory.

Easway is currently ranked as a pirate in the crew Twisted Glory due to his long term absence. He has last logged in at December 28, 2006, during which time he didn't say a word and disappeared.

Easway can usually be found in the inn on Pukru Island with friends or on a pillage. He owns a row house on that island.