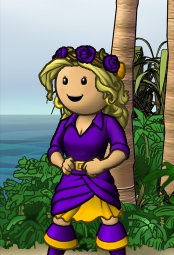 Dittemuzz is a pirate on the Midnight Ocean. She is currently fleet officer of the crew chum for poe and member of the flag poe chums.

Dittemuzz has been playing since Beta testing.

Equinox managed after several heartbreaking unsuccessful blockades to win the island of Guava in the Emerald Archipelago, over which Dittemuzz, who was Equinox's monarch, became governor.

On August 14, 2004, this relationship was cemented when Ditte (as her friends call her) and Penn (as anyone who feels like it calls him) were married, during a week of exciting events they had organised.

Dittemuzz remained the queen of the flag when it converted from Equinox back to Rudder Revolution.

Ditte is well known for her business skills; she currently owns the following:

Ditte is the proud owner of a tan octopus named Lotte.