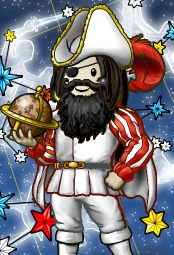 Zarquon is one of Phoenix Ascension's senior officers on the Meridian Ocean, and recently on the Emerald Ocean, and an occasional cabin person (due to current lack of subscription) on the Cerulean Ocean.

Zarquon can usually be found at a Carpentry station, but is not a natural bilger, being unable to bilge his way out of the bathtub. He has recently rediscovered a love for sailing.

Zarquon closed his Apothecary stall at Salstraum Rock due to the slow nature of orders on that ocean, but is considering starting the business up again somewhere where there is sufficient trade.

Zarquon thinks he can do distilling, but you'd be advised not to drink any of what he makes.

The name 'Zarquon' [1] comes from Douglas Adams' book, The Hitch Hikers Guide to the Galaxy, and is the name of the universe's greatest Prophet (and also the most common swearword outside of Earth). Zarquon hopes to make a great profit in Puzzle Pirates.

Zarquon finished memming the entire Malachite Ocean at 1:25 AM UTC on Friday 20th March 2009, and has since memmed the entire Sage, and Hunter oceans. Following the merge, he's doing it all over again, despite orders from his psychiatrist not to.

At approximately 23:30 GMT, March 5th 2012, in the middle of nowhere, the Meridian ocean was completed. (The Meridian ocean has a very long and nasty inter-archipelago route linking the two old ocean areas, and the final league point was nine leagues away from Flyaway island, and wasn't the easiest to get to). Throughout the memming process, a progress map was kept online showing Zarquon's memming progress, have a look at this file which also shows the routes in northern meridian which are purchsable, navy-memmable, both, or neither.

Zarquon finished attacking the league points of the Emerald Ocean at around 21:40 GMT, June 4th 2012; His eastern-bloc counterpart, Zarquonski, already had that side memmed, but in a frenzy of east-west diplomacy, the entire ocean was eventually charted and memmed after a lot of logging in and out.

Zarquon finished memming the Ice ocean on October 23rd 2012, and has now moved on to memming the Opal ocean, which has to be done in German. Zarquon rates his german at something like 'Narrow/Respected', unlike his spanish, which is definitely 'Novice/Unable'

If you can find him, he will chart you pretty much anywhere, usually for free.