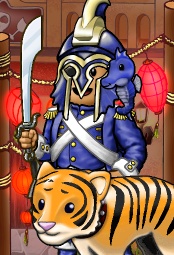 Zalt is captain and ambassador of the crew The Flames of Fate. He navigates the Meridian Ocean.

Formerly Zaltos, Zalt/Zaltorque (also known as "Zal") began in 2007, searching for a crew that he would belong to.

He found Cilon's crew The Viridian Force where he formed everlasting friendships with. He made made bonds with Bsdogbones, Toontask, Jocely, Sasukeone and Lovelylady. He left for one year and came back in 2010.

In August, Zaltos joined The Seas of Anarchy, with his old mates after Cilon got banned and Nachoshere was made the new captain of The Viridian Force. He started as a fleet officer and on one of his great pillages, met Darkmagcian who joined their crew but as a senior officer. Being lower ranked than his recruited friend, he was motivated and soon became a senior officer himself.