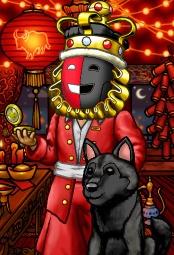 Yoyes is a pirate on the Sage Ocean. He also spends his time on the Ice Ocean.

Yoyes was formerly the pirate Bobtee. Yoyes was captain of the crew The Kraken's of Hell and a prince of the flag Tiranga. He used to enjoy taking ships into Atlantis as well as hunting flotillas.