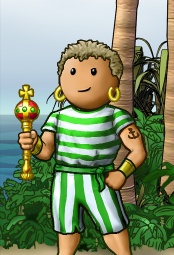 Yelloh is a pirate of the Hunter Ocean.

He plays a bit on Sage, where he is a cabin person of the crew Your Worst Nightmare.

On Viridian, he is a pirate of the crew Requiem. On this ocean he received a pegleg after his first sink which made him pretty annoyed because Viridian is not his main ocean.

His favorite puzzle is Carpentry and he really hates duty Navigation which is why he is solid able. Most of the time his Battle Navigation is legendary but occasionally he will get it up to ultimate.

He currently does a lot of pillaging and getting all his labor alts doing Shipwrightery so their labor doesn't run out.

A Life of a Pirate

Yelloh started as a greenie on the Lincoln Island dock of the ocean of Sage in early 2006, and was a cabin person in the crew Yellow Turbans. He founded the crew Aussie's Revenge with his good mate Greendevil (later Griffin). When the opening of the Hunter Ocean was announced in April 2006, he started packing up the little stuff he

He started out on Hunter ocean as a cabin person in All For Rum. He first became officer in the crew El Cielo Azul and finally thought about getting his stats up to something decent as well as learning how to bnav.

Yelloh founded the crew Precision in 2007 with his good friends Meesh and Griffin.

Now retired, Yelloh does not log on often, as real life priorities have caught up. However, it has been a pleasure playing Puzzle Pirates.