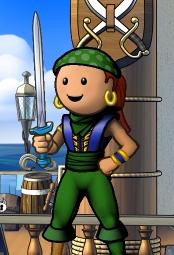 Ybbald was a pirate on the Hunter Ocean. Her name is short for the question: 'why be bald (y-b-bald)?'

This pirate has been deleted.

Ybbald played Puzzle Pirates on the Hunter Ocean for more than two years. She started out with the crew Sands of Time, where she reached the rank of fleet officer, before the captain quit. The crew dissolved, and Ybbald joined another crew, Kings of Chaos. Kings of Chaos merged with -Frozen-, and Ybbald spent about a year with them. She then moved to Subordination, another crew that was in the same flag as Kings of Chaos. Following this, Ybbald spent numerous months in several different flags and crews made by Addiction, Cherished, and Amyxlala. She then rejoined -Frozen-, after taking a couple months' break.