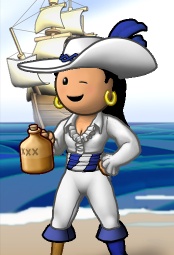 Yamiko is known by most of her mates as Yami or Yummy. She is a pirate who sails Viridian. Yamiko is senior officer and wench of Suicide Messiah, member of Razor's Edge and a captain in the Prolix Purlieu navy. She puts into port on Prolix Perlieu. today, pirates young and old swear they see Yamiko sailing the Viridian Ocean on her ship the Cazy Canadian.

Yami's true love are the guns. She's seen often gunning in atlantis or at the guns of a ship pillaging the high seas. When she's not taking the lead in guns Yamiko enjoys operating sails on the high seas or playing the part of a termite chomping away at the carpentry puzzle. She also has a great affinity for collecting pets. While on land, Yamiko enjoys gutting pirates and AI's alike with her sword.

Yamiko first washed up on the shores of the Viridian Ocean in January of 2005. With hearties Aadelynn and Ladyanza at her side she soon joined a crew and commenced her piratey career.

A couple of months after that Yamiko, answered a jobbing notice on the Notice Board and ended up jobbing for the crew The Elder Scrolls on a pillage commanded by Chaosdaddy. After a few repeat pillages with the crew, Chaosdaddy recruited her, convincing her that The Elder Scrolls would be a good fit for her.

When the crew, which had been shrinking, decided to merge into Odin's Demise in May of 2006, Yamiko retained her rank as senior officer within the combined crew under the leadership of Captain Reepacheep.

In September of 2006 Yamiko entered the business world by opening an Iron Monger Stall on Dragon's Nest Island, supplying both swords and cannonballs to pirates across the ocean.

On May 17, 2007 While pillaging with her crew helped defeat The Widow Queen and twelve of her sultry lady piates aboard a merchant brig. The win marked Yamiko's first defeat of a Brigand King. To secure her freedom Yamiko was ransomed an orange bottle of rose goddess perfume.

On June 3, 2007 she assisted her crewmate and close friend Hawkings to a second place finish in the BK Fruit Frenzy Races on Viridian. For the race she acted as a sailor ran from Erh Island to Dragon's Nest to Cabo de Hornos and took the crew 46 minutes to complete. For her contribution she was awarded a maroon/tan parrot feather.

On Febuary 26, 2008 Yamiko decided it was time for a change, but unwilling to let all of her ties to her mates in Odin's Demise fall out see moved to Phalnax, where she could still be with her mates, and grow as a pirate even more.

In late April of 2008 Yamiko decided once again to take on the the buisness world, by opening up a new iron monger on Jubilee, taking over Keverrs Iron Monger on Lima, and deciding to do something different for herself she also decided to open up a Distillery on Jubilee.

Time for a Change

On, May 11, 2008- Yamiko and a few friends decided to try something new and moved to the new ocean Malachite, where she hopes to have a new start at a new pirate life.

Changes are a Wonderful thing

On July 15, 2008 - Yamiko decided it was enough time for a change and headed back on over to Viridian where she knew her true home lied. When she washed up onto the shores of Viridian, Solame was there ready and waiting with a towel in hand to great her, and welcome her back with open arms too Wobinson's Angels.

On Nov 15, 2008 Solame decided it was time for Yamikkins (Solame's nicname for Yamiko) to have some responsibility and notoriety in the crew. Being one of the more prodominate players and crewmates, Solame rewarded Yamiko with Officership for all her hard work and loyalty.

As time went on Yamiko worked hard with her stats and attitude and eventualy was made Senior Officer in Wobinson's Angels, thus hitting a peak point in her Pirates career.

On Nov 25, 2009 - Yamiko was rewarded with a sloop called the Crazy Canadian from her loving Captain Solame, for hard work and recognition for all the good shes done in W.A. Now. it was time for Yamiko to finaly take up the reins and Bnav once again.

On May 13, 2010- Yamiko recieved Grand-Master in Bnav for the first time --- a long time comming and a lot learned from not even knowing how to Nav at the start of the year!

On April 14, 2010- Yamiko decided it was time to take the reins again and start MaAing and XO in atlantis. with the new releases it brighten'd her spirit for jobbers and crewmates alike! now theres no lazing allowed!!

On April 28, 2010 - Yamiko won her first Karks in atlantis, Bnaving was her hearty and crewmate Brisky. Brisky was a fine navver sinking all and any Triktose that came his way. the two were sailing a War Brig in Atlantis for quite sometime

On September 26, 2010 Yami finnaly had a wedding ring put on her finger by her piraty love Cherylshubby, known by all his mates as Dav. It was a lovely Ceremony, Solame did them the honour of preforming the marriage ceremony. Staycr, Ruin, Fireandic we're all the best bridesmaids any girl could wish for, and Padamai was the lovely Maid of Honour :) Vantom and Rolphy were the best man and Groomsmam. Rolphy wrote a lovely bestman speach that brought tears to certain pirates eyes.... AHEM. :)

On October 15, 2010 Yami decided it was time to move on from the angels and join up with Razorback in his crew the Suicide Messiah. Razorback kindly gave Yamiko the title of Wench as well as the position of Senior Officer. Thus allowing Yamiko to pillage and sail the 7 seas.