You will see many a Whirlpool on the sea battle board. Some pirates treat them like rocks - to be avoided at all costs. Here is a set of six standard moves that take advantage of the whirlpools instead of avoiding them. After you master these six, you should be comfortable enough to attempt variations on your own. 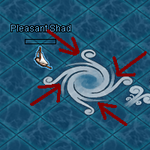 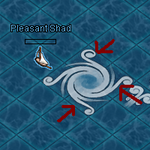 Every Whirlpool moves ships clockwise. There are eight spots where your ship can enter a whirlpool, but only two types of spots. We will call the entrances where you can see the water being sucked in open and the other type closed. A ship in a Whirlpool is turned 90 degrees clockwise but moves 180 degrees (to the other corner) after each token movement finishes.

For screenshots of exactly what happens when you use a given token with a whirlpool, see Whirlpool movement.

Lab Experiment:
Use the applet to go into the whirly. See Experiment video

Full details for using the Whirly Math Laboratory applet are found at How to Use the Whirly Math Laboratory. For practicing the patterns below, just click either Start at Open or Start at Closed as appropriate, then click Change Tokens to set the tokens to match the pattern shown. While Change Tokens is active, clicking the spots where the tokens (or cannonballs or grapples) go will rotate between the possible tokens just like it does in-game. When you have the pattern matched, click Change Tokens again to deactivate it, then click Go. You can adjust the speed of the applet by moving the slider bar at the top of the applet to the left a bit.

The first pattern to learn crosses the whirlpool coming out 90 degrees clockwise from your entrance. Start at any open entrance, and use two green tokens.

Crossing the whirlpool coming out 90 degrees counter-clockwise from your entrance is a bit trickier. Start at any closed entrance, and use two green tokens, but you need to skip two tokens between the green tokens.

To go straight across an whirlpool, starting from an open entrance, use a green token, skip two, then a gold token.

In-game video of Straight from Open

Experiment video of Straight from Open

You can go straight across starting from a closed entrance too; it just needs a green and a blue token.

In-game video of Straight from Closed

Experiment video of Straight from Closed

Whirlpools are handy for turning your ship around too. Start from any entrance at all, and use a green, skip, then green token. You will end up at the same entrance, just outside the whirlpool, but facing the opposite direction.

In-game video of 180 Turn from Open

In-game video of 180 Turn from Closed

Experiment video of 180 Turn from Open

Experiment video of 180 Turn from Closed

Now sometimes a sneaky but wounded brigand will stop just outside a whirlpool. Use this trick if his rear is touching a whirlpool. First, move so that your ship is directly across the whirlpool from him, pointing into the same type of entrance. For example, if his rear is touching a closed entrance on the North side of the whirlpool, then you should be pointing into the closed entrance on the South side. Now enter the whirlpool using a green token, and firing left at the same time, skip a turn, then shoot right. As long as the brigand doesn't move, you can just sit in the whirlpool using shoot left, skip, shoot right. When the brigand is maxed, just use a grapple instead of shooting.

In-game video of Shooting from Open

In-game video of Shooting from Closed

Experiment video of Shooting from Open

Note: You will need to set the target? switch to On before you click Start at Open or Start at Closed if you want to practice shooting in the lab. 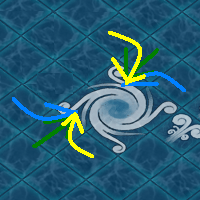 Sitting parallel to the whirlpool is extremely useful in shooting. If the brigand is parked with his backside to a whirlpool, and you have been sitting there on the other side shooting him, when you are ready to grapple it just takes one turn. Use a gold turn into an open entrance, or a blue turn into a closed entrance, with the grapple on the first turn. Or you can enter the whirlpool and shoot from there. 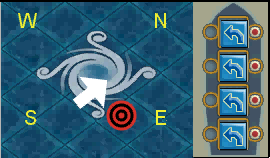 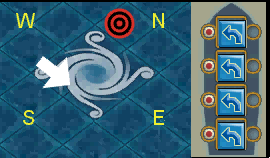 If you are already inside the whirlpool, and the rear of your ship is touching a closed entrance, you can use a blue token to walk in place. The effect is staying in the same place, with the same orientation.

This is particularly handy when you are lined up to fire, as it allows you to shoot four times instead of two if you have four blue tokens.

Experiment video of Walking in Place, with target at an Open entrance

Experiment video of Walking in Place, with target at a Closed entrance 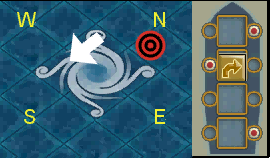 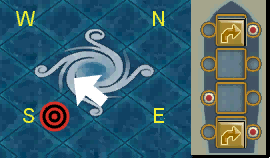 If you are already inside the whirlpool, and the rear of your ship is touching an open entrance, you can use a gold token to jump ahead. The effect is staying in the same place, but pointing out of the whirlpool instead of into it. If you do this right after shooting, it allows you an extra shot (so you can get three shots instead of just two).

Experiment video of Jumping Ahead, with target at an Open entrance

Experiment video of Jumping Ahead, with target at a Closed entrance 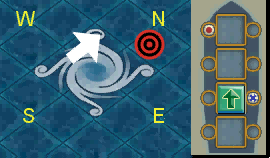 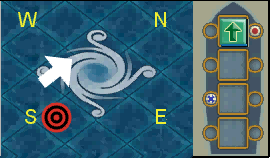 If you have been bouncing inside the whirlpool and shooting at your enemy, but can't grapple him, this is the trick to use. Use it when the rear of your ship is touching the same side of the whirlpool as your enemy. Place one green token, and a right grapple.

Experiment video of Switching Corners, with target at an Open entrance

Experiment video of Switching Corners, with target at a Closed entrance 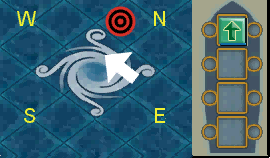 If the enemy ship moves after you are inside the whirlpool, often the corners you are bouncing do not allow you to shoot him. Tis not hopeless! Use a green token when the side of your ship is touching the same side of the whirlpool that your enemy is touching, and you are facing into the whirlpool.

Experiment video of getting into position to shoot, with target at a Closed entrance

Moving Inside the Whirlpool 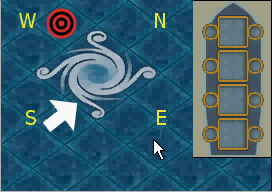 Shoot the target six times, then grapple it, all from inside the whirlpool. To see one solution, watch the Challenge #1 video 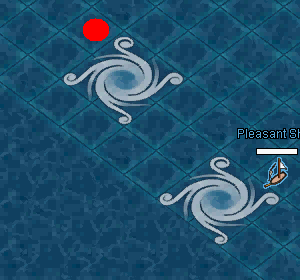 Figure out how to move the sloop from its starting position to the red target, with exactly five tokens. For a hint, watch the Challenge #2 Video. Can you determine which tokens were used?

There are three target practice games you can play in the Whirly Math Laboratory. Set the target? switch to On and then click Random start to play one of them. Tis a target, not a brigand, so it won't move and it won't shoot at you.

In the Bull's Eye game, your goal is to move your sloop until it is on the same square as the target (and then stop). When this happens, the target vanishes. If you don't stop, it counts as a miss.

In the Grapple game, your goal is to grapple the target. When this happens, the target changes color and your sloop stops moving (even if it is in a whirlpool or has more token moves lined up).

In the Fire game, your goal is to shoot the target as many times as you like. Every time your cannonball hits the target, flames burst out fer a short time.

In-game images and videos used above were taken from Yohoho! Puzzle Pirates, copyright Grey Havens. Images were composited by Lordkalvan for use on this page and also in the applet. This tutorial was created as an entry in the Ultimate Guru event.