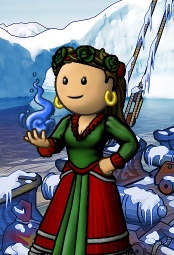 Ush is a pirate lass that mainly roams the Emerald Ocean.

Ush was born into the Hunter Ocean on the day it opened. Having stumbled upon the game by chance at that very day she was a true greenie on a very green ocean. A day or two after - still being a greenie but now forever stuck with a yellow name - she was invited into her first crew: Mafia. Mafia was at that time run by the founder of the crew Donvito, a very experienced player. In the summer of 2006 Donvito found himself very busy and asked Ush to take over Mafia. She accepted and became the captain of Mafia. During one of her dormancy periods Mafia was infiltrated and later merged in to a Sagean crew. At this point Ush joined Tribute for a period until finding her home in Natural Born Chillers in the fall of 2016.

Even though Ush like most puzzles there is one that beats them all – gunnery. It was not a puzzle that came natural to her; it took a good while before she was even decent at it and she owes great thanks to the captains that endured her fine and good battle gunning while she struggled to get better. But being in love with guns she kept going and never seemed to tire of the puzzle. She gunned enough to eventually secure her the top spot in the huntarian experience list of gunnery, a spot she kept throughout her first burst of active years. After some rather dormant years she has lost both her grip on the experience list and a some of her skill in gunnery but the love lingers non the less.

Wile Hunter (now Emerald) is her true home there is an Ush on all the oceans. Most notable of the non-Emerald variants is Ush on the Meridian Ocean, where she resides in the crew The Midnight Society.