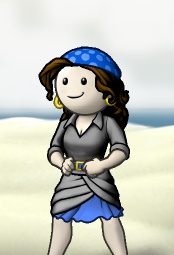 Ardea is a pirate on the Midnight Ocean who lives on Winter Solstice.

Ardea first went on the account in the summer of 2007, seeking adventure, pieces of eight, and new mateys. Her introduction to Puzzle Pirates came by way of Angelisa. Before long she came to meet many cutthroats and buccaneers, including Yanou who invited her to join Big Bro'.

She served in the Cold Fire blockade of Cnossos Island on August 11, 2007.

She was promoted to Officer by Orangepeel August 15, 2007.

She was promoted to Fleet Officer by Orangepeel and Yanou September 2007.

She founded her own crew, West Diamond Trading Co, January 28 2008.

Her favorite colors are grey and navy.

Her favorite puzzles are Sailing, Distilling, and Rumble.

Now that she owns two businesses on Cnossos (a distillery stall and a weavery stall), Ardea envisions organizing a staff crew for trading runs and duty puzzling. She plans to finance this crazy idea with funds from her Avatar Shoppe[1].

Ardea is the creator of the Pirate Flag-O-Matic, a Flash program which enables pirates to design flags using game images and colors. Version 2 is in the works.