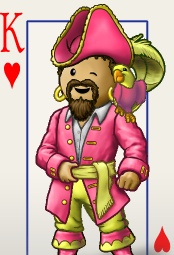 Sphyrez is a senior officer of the crew Shadow Riders and a member of the flag Unknown Shadows on the Midnight Ocean. He has an alternate character named Trinketbell.

On the Hunter Ocean, Sphyrez is a captain of the crew Iniquity under the flag The Eye. He was captained by Adalaide after she went inactive late last year.

Sphyrez first washed ashore the waters of the Midnight Ocean in May of 2005. He joined the crew Legacy of Heroes under Deanti who was the captain. Later he followed Shiskra to a new crew named Shadow Riders. When he was at Legacy of Heroes, Sphyrez was a pirate but quickly rose to the rank of officer. Later when he joined Shadow Riders, he was promoted to Fleet Officer and then later on to senior officer which he holds currently.

Sphyrez have often wondered what it feels like to own a familiar. He put his priority to one day own a familiar of his own. He would try over the course of his play to win a familiar during the monthly familiar tournaments organised by Ocean Masters. He tries hard to compete in the parley games. He has been an Ultimate puzzler on Treasure Drop as he found it very nice and competitive. He prefers playing holes and turbo as he still wants to discover the random mechanism about the holes. Occationally he would drop to Legendary but it is easy for him to climb back to Ultimate standing anytime.

Later with the introduction of Rumble on the test server, Ice, and then oceanwide, he managed to get #3 in the Ultimate list. But he went into a slump recently and found it hard to regain his standing since many people have improved tremendously.

His first chance of winning a familiar came in January 2006 Treasure Drop tournament. He was beaten by Madmeg in the finals who claimed an orange monkey. Another time would come in the May 2006 Odds and Ends Treasure Drop Tournament where he ended up a winner after a gruesome 5 hours of competition and beating Jenfa to win a Yellow/Pink parrot which he named Cupid.

He also managed to join the Hunter Treasure Drop tournament at the same time and won as well. His prize was a White/Yellow parrot which he named Valentine. On the next day, he nearly won the Odds and Ends Rumble Tournament on Midnight when he reached the finals, only to lose to Lovelytini by 2 games to 1.

Sphyrez has gone quiet these days. His only interest now is playing poker and collecting trinkets.