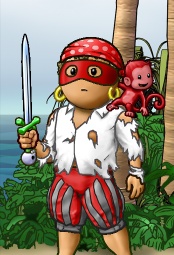 Trick is captain of the crew Bad Dudes and founded the flag The Kids Table. In October 2005, he defeated Punishment in a best-of-seven wager for the ginger monkey from the 9th BD Swordfighting Tournament. The monkey found a Marx-Engels reader and, after an intense read, his skin turned red. Simultaneously, and after long consideration, he decided upon a name for himself. He now goes by Markz.

In a previous life, Trick was the pirate Trickykid of the crew Black Death. He was in several of the winning Olympic Champions League (OCL) teams. In season two, he was in the Sea Battle team BitterDeath. In season three, he was captain of the Team Brawl team Bitter Death. And, in season five, he was on the Sea Battle team Bleak Death. When his teams failed to win (in both Sea Battle and Team Brawl), they still made it to the finals or semi-finals. He won the white OCL monkey, STABBY, for the most recent Sea Battle; STABBY now sits on Rochelle's mostly dormant shoulder.

Trick ran Weekly Sword Tournaments for two months. His experience in running tournaments led him to design and officiate the qualifiers for the The Grand Sword Finals! for the March Madness familiar contests.