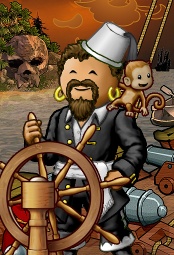 Punishment is a Fleet officer of the crew Dark Vengeance. He won a tan monkey in the 9th Black Death Swords Tournament of August 2005 on Midnight. Interestingly he was the object of Poseidon's ire for a good few minutes, due to his indecision in picking a color for his monkey. However, on 28 October 2005 he lost it to Trick in a best of seven wager against 2,000,000 PoE. The score was 4-0 to Trick.

Punishment was known to exclusively swordfight. However, he became dormant in early 2006, and has not returned since.

After Leaving the shores of midnight secretly early 2006. Punishment as been wandering around endlessly beer testing with his old pal Whitewizard. After 94 pubs in 2 days he was uncertain of his whereabouts and began to stagger back to the dock. Once arriving at his destination he managed to climb into a create and fall fast a sleep. After waking up with a HUGE hangover he stood up and looked around. The sun light was beaming down and he heard the familiar sound of cannon shots and he gazed out to sea and wondered where he'd left whitewizard. But as he began thinking about this, a parrot thought it'd go poopie on his shoulder. Looking up in anger he saw Darkmemory. A fearless but fair captain who ordered him to help them fight as he was in fact a stow-away on board there ship. So diving on to the other ship without a second thought began gutting as many other pirates as he could see with his trusty scimitar. Now having managed to find himself on alpha dock once again. He is now determined to finally work out how to read and write and maybe someday get even with Trick.