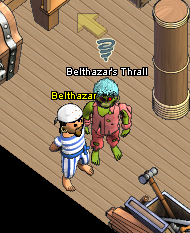 A pirate and his thrall.

Thralls are a specific type of zombie seen only while attacking the Cursed Isles. Thralls are zombies enslaved to an Enlightened One or a pirate. Unlike normal zombies, thralls will fight in either rumble or swordfighting, depending on what kind of combat their master requires them to do. Enlightened Ones and their thralls board vessels attacking a Cursed Isle by colliding their raft with the vessel, then climbing aboard as the raft sinks - once aboard, the thralls either attack pirates or interfere with stations. When there is an equal ratio of pirates to boarders, there will be a whole-vessel rumble.

Pirates on board may cast a spell, represented by the flower token maneuver which either banishes the thralls, or takes control of them away from the Enlightened One and transfers it to a pirate. When under the Enlightened One's control, the thralls all have names of the form Adjective Zombie, but when controlled by a pirate, their name changes to Piratename's Thrall. If the controlling pirate leaves the vessel, the thrall's ownership transfers to another pirate. Each pirate may only control one thrall, but an Enlightened One may control up to four. If a thrall is eliminated in battle, the control over it is broken, and it leaves the ship.