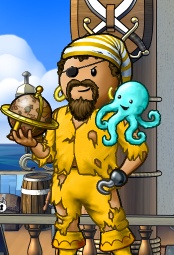 Steveyohoho started his illustrious pirating career on Cobalt on the island of Cochineal Island in the summer of 2007 and shortly was recruited to Highway to Hell. He worked up to becoming a senior officer and prince in the flag of Apocolypse where his bread and butter was long brig pillages. After some tension with then captain Thekatz, Steveyohoho left with other former Highway to Hell members to form Flirts and Damsels and run a successful crew and flag. Pirates can find Steveyohoho on long brig pillages, the flotilla board, or the blockade board most days.