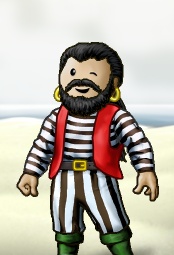 Stabsman is a pirate of the crew Posiedon's Executioners and member of the flag Down The Lucky Rays.

He pillages on the Sage Ocean.

Stabsman began playing Puzzle Pirates late May 2006 and first joined a crew named Brotherhoodoftheexiled under captain Christopheon's autocratic rule and part of the flag The Phantom Fleet. He was quickly taken in by new friends as one of the crewmates. Stabsman was soon to be foreverly know as "Stabs" as a nickname. Stabs, still a greenie and still very new to the game, was taught the ropes by his senior officer, Bixley. Later, Bixley left Brotherhoodoftheexled and started her own crew No Luck and flag, Down The Lucky Rays. Stabsman was promoted to senior officer when Brotherhoodoftheexiled became Judgement Day. Judgement Day later then joined Bixley's flag but quickly left. When Bixley retired and Judgement Day went dormant, Stabsman became a crewmember in Dark Rays Above under Down the Lucky Rays. He instantly became fleet officer because his hearty, Majjikkatt, was captain. However, after some time in Dark Rays Above, more and more members left the crew or went dormant. So after some conflicts, Stabsman left the crew to go to Defenders of Truth under the flag Verus Fidelitas because he was friends with Blackvixey in The Phantom Fleet.