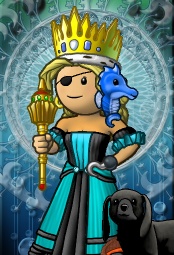 Sorileea is captain of the crew Enigmatically Berserk on the Emerald Ocean. She was the former queen of the flag Go Hard or Go Home and former lady of the flag Illusion.

Sorileea was formerly a senior officer in the crew -Obliteration- and member of the flag Seas the Day on the Hunter Ocean.

Enigmatically Berserk: Crazy in a puzzling, mixed up way. Living in a confusing delirium of hope and despondency.