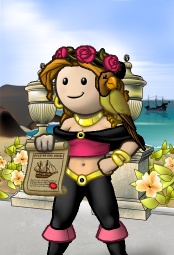 Skardu is a pirate on the Sage Ocean. She is a fleet officer of the crew Cannon Fodder and member of the flag Eternal Glory. Skardu lives on Admiral Island in her lovely villa, with her many pets and friends.

Skardu began her pirate life in Feb 2007, it did not take long for Skardu to discover that there are some puzzle duties she excels at while there are others that are more difficult to achieve, her standings are slowly improving, but her Battle Navigation will never in a month of Sundays be any good because she is so bad at it, but she will keep trying.

She had jobbed with many crews, before joining Fair Winds as a pirate after a chance meeting with Everclearboy, she was so impressed not just with his pirate skills and sense of humor but also his attitude and treatment towards others, that she happily followed him to Xensity where she has since met and made many friends. Skardu is always popular when she logs on and many hearties are always quick to request her company on their pillages, when Skardu is not out pillaging with her crew and hearties, she can often be found playing hearts but has recently discovered Alchemistry and Shipwrightery.

She now owns a sloop, and enjoys defeating skellies and zombies whenever she gets the chance. Skardu won her first ever Brigand King trinket recently with the help of Everclearboy, and following changes to the crew Xensity, Skardu decided it was time to follow a different path so she left the crew and for a while roamed independently until she joined Cannon Fodder, where she has risen to the rank of fleet officer, and the flag Eternal Glory.

Skardu has at last found a home with an amazing group of people. At the moment she can be found memorizing the ocean while she tries to master the art of Navigation. Skardu also loves to journey to Atlantis and to hunt Brigand Kings.

Skardu is the owner of the following renamed vessels: