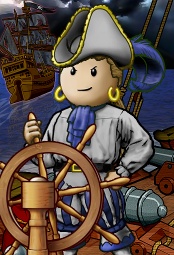 Sirvictorius is a captaincrew Knight Stalkers and king of the flag Shadow Knights on the Viridian Ocean. His most accomplished puzzle is bilge, and hopes to one day get the #1 bilging trophy.

Sirvictorius started the game on the Viridian Ocean, having washed up on the shores of Sakejima Island. He wandered about in various crews including Oceanos and Star Oceans Apart for a matter of weeks before he settled down in the crew Make our Riddles. After becoming first mate of Knight Stalkers, he then became a Captain and soon thereafter Monarch of the then-dead flag Shadow Knights.