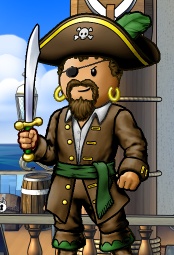 Senior Officer of the Ransack Marauders and Prince of Marauders Pact.