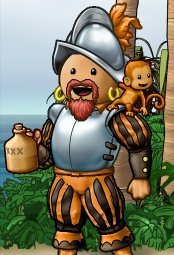 Seatiger won a orange monkey in the Sestina? Madness! of March 2005 on Midnight. Her name is Thalia after the Muse of Comedy.

Seatiger is the founder of the crew The Spanish Inquisition and presently serves as a Senior Officer.

Seatiger also won the honor of being Eris' footstool in a poetry contest.