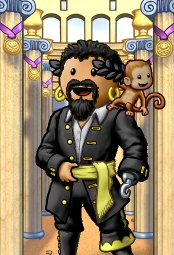 Searmin is a senior officer and distiller of the crew Painted Devils and a member of the flag Rogues' Gallery.

Searmin accidentally stumbled into existence after spending too much time on Wikipedia one Saturday morning in March 2007. His unusual name was the result of a poorly thought-out decision where he started writing his own name and then added some random "piratey-sounding" letters at the end (namely, "r"), resulting in a name that he pronounces "Sharmin" but spells "Searmin." Searmin claims no association with Charmin toilet paper or Prince Charming.

He was thrown onto Cobalt and decided to subscribe a short time later, but after the advice of a friend of a friend who played the game, he moved to Midnight where he appeared on the shores of Cranberry Island. Timid at first, he took two weeks to even begin jobbing on pillages. Within his first week, he jobbed on a pillage with a small new crew called Radars of a Lost Barque. After gunning for the entire pillage, he instantly found friends in the crew members onboard and promptly joined the crew at the end of the pillage and went off with his new crew to play spades.

Searmin showed early skill at a number of puzzles, and quickly became known within his crew and flag for his incredibly excessive knowledge of YPPedia. He particularly liked to distill, and practised for many hours until he finally reached Ultimate in August 2007. He also loves duty navigation, and spent a number of months memming Midnight, completing the ocean on 6 January 2008. He achieved #1 in distilling on 19 July 2008, and then won a tan octopus named Cthulhu on 17 August 2008 for distilling in the Olympic events, followed by a pink/maroon parrot named Absentia on 22 August 2008 for the happy hour event, which consisted of bilging and distilling. He then vanished off the ocean for several months due to work obligations, with his two familiars living with Deadeyedora and Mohna while he was away. He returned in December of 2008 and continues to play today. His crew continued to shrink over time, until eventually going defunct in 2009, at which point Searmin followed his captain Deadeyedora and fellow senior officer Mohna to the crew Rogues Riding of the flag Folie Circulaire, where he resides to date.

Searmin has a fleet of sloops, but particularly loves standard renames with pun titles. His renames consist of the following: