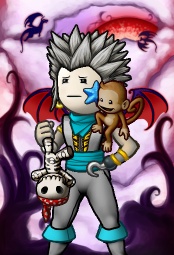 Seapint began playing Puzzle Pirates in September of 2007, on the Hunter Ocean, under the name Bethw. She quickly found a love for Atlantis. After spending 3 years as Bethw, she found that most of her friends had long since left the game, and decided to make a fresh start, this time under the name Sealitre, a male pirate.

As Sealitre, she found her best puzzles: Carpentry and Foraging, quickly introducing her to the Cursed Isles. She joined the most infamous crew at the time: Sinica, in which Sealitre remains, as of September 2018. After another 2 years, she missed being a female, and decided to once again make a fresh start, as Seapint.

After continuing to bounce from crew to crew, she joined up with the only remaining friend from 2007; Poopzilla, and co-founded the crew We are One. Their crew fame quickly rose due to their citadel runs and regular pillaging.

As of September 2017, Seapint can be found on the Obsidian ocean with the name Enforcer.

Contrary to popular assumption, Enforcer is a female pirate. She can still be found playing on the Obsidian ocean, most actively on weekends, lending her carpentry or XO experience in blockades, or stealing eggs from angry Krakens. As was the case many years ago, Enforcer is a keen artist, and has an art shop on the forums.

Being British, Enforcer can usually be found snoozing on the docks of Port Venture from 4AM-9AM Pirate Time. She is a mass opener of black boxes, exploder of limbs, and gainer of trinkets.

Visit her gallery on DeviantArt for her other works.