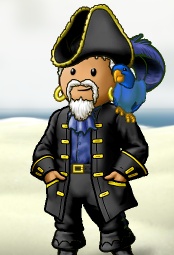 Scott began playing on the Midnight ocean, he was seen by the public eye as just another ultimate swordfighter. However after many years of game play it was clear to nearly everyone that he was no laughing matter when it came to handling a blade (usually a skuilldagger). Later on in his career Scott traveled over to Viridian on the name Elvynd. There he won a Lime octopus Squizzle in an Automated Swordfighting Tournament. Anyone who played him would say that he was a tough challenger... but the real challenge came in 2007 when Scott was diagnosed with leukemia, a serious type of cancer that is painful, but treatable. Incredibly though, (according to close friends Dunny, Complicated, and Cioj), Scott was able to beat the cancer, as he does with many top swordfighters.

Unfortunately, Scott has resigned from the game, he occasionally logs on to keep his account/accounts active.