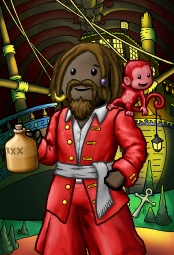 Scditwe is one of the longest standing senior officers in the Thieves of Mercy and is Prestige's most active merchant. He owns several stalls in the Pelican Archipelago on Sage and manages several more.

As of April, 2010, Scditwe stands as king of Prestige in Yj's absence. This also serves to ensure that Scditwe will be installed as governor once Prestige successfully blockades an island.

Scditwe is a very laid back player who is always quick to leap into the playful banter that is nearly constant when more than three of the Thieves are online and not in puzzle-mode. He rarely can be found pillaging but tends to spend his in-game time managing his stalls, working on orders for the stalls or transporting goods for production.

Scditwe claims that he came up with his screen name by simply dropping his fingers onto the keyboard when he made his character. None of his crew-mates have been able to replicate the pattern so they all suspect that there is some greater meaning behind the name that has yet to be revealed.

A typical run-in between Scditwe and Connell

Scditwe, obviously drunk, stumbled into an inn for a drink. Bleary eyed, he looked around the tavern until he spied a gorgeous dark-haired Irishman polishing mugs behind the bar. He made his way unsteadily to the bar.

"I'm sorry, my friend," Connell replied, "I can't do that. You've already had too much tonight."

"Fine! Be that way." Scditwe muttered and staggered back to the street and Connell returned to polishing mugs.

A few minutes later Connell heard a noise at the door. He looked up to see Scditwe standing in the doorway, staring at him with the most confused look on his face. After a long moment, Scditwe shook his head and approached the bar, his gait not unlike that of a pirate on deck amidst a nasty squall.

At the bar, he locked his blood-shot eyes on Connell's grey-green ones and said with the distinct diction of a lush trying desperately to hide his state, "Connell, I would like some rum."

"Scd, my dear, dear friend," Connell answered, " I love you like a brother, but I cannot in good conscience give you anything to drink when you are in this state."

"Scupper you, you kilt-wearing bag of snot!!!" Scditwe erupted and stormed out, running into the door before remembering to open it.

This scene repeated itself in some form five more times, with Connell's patience slowly waning and Scditwe growing less belligerent as his confusion grew.

On Scditwe's eight entry into the tavern, he paused at the door upon seeing Connell. With a resigned sigh he plodded slowly to the bar and sat down on a stool. After a moment he gazed at his crewmate, his eyes pleading. Connell simply shook his head.

Again Scditwe gave a resigned sigh and asked his long-time friend in a voice drenched with longing for one single drop of rum, "How many bars do you work in?"