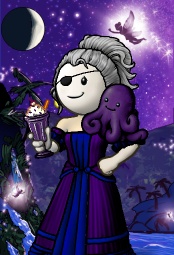 Salacious is the captain and urchin of the crew Sexual Innuendo, and the queen of the flag Dirty Thoughts on the Meridian Ocean.

Before the merge of Viridian and Malachite, she was previously known as Severe on Malachite Ocean as well as Exuberance on Viridian Ocean. She returned to the game in September 2017 after the release of Dark Seas to play with her loves Starscream and Xbambehx. You can currently find her on the Obsidian Ocean.

She spends her days dock tarting, lazing, and annoying her favorite hearties whilst she writes up the many psychological reports for work and school.