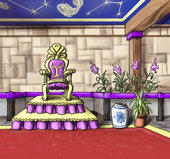 Sadiekate is one of the winners of the Design the Oceans Contest.[1] Her excellent design work can currently be seen at the following islands:

Sadiekate also designed one of the small Cursed Isles, and a few Atolls.

She is the designer of a retired, limited-edition portrait background.

After many years of entering artistic contests, she took home a parrot in the Y!PP's Greatest Hits 2007 everything goes contest.

Senior Officer Sadiekate of the Kamikaze Guppies sails with her crew under the flag of Looterati.

Sadiekate (known publicly as Skal on the main forums) is well known for her artistic abilities. In addition to her contribution to production-ocean islands and her portrait background, she was runner-up in Apollo's avatar contest, for which she received an Apollo Doll. She has also received dolls from both Greenbones and Fishheadred for her work on the Cursed Isles.