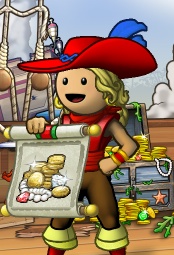 Roselle is an independent pirate on the Viridian Ocean. She is the ex-captain of the crew Krakens Revenge, which disbanded in 2008 for unknown reasons. Roselle was a proud supporter of Imperial Coalition, and advises that crews looking to join the flag should give Monlizzy a tell on the Viridian Ocean. Roselle was always looking to help new players, but she has now reportedly been banned from the game.

Roselle has played since 2007 and she loves Puzzle Pirates. Even though she was banned, the love has never left.