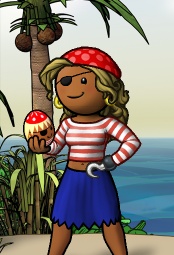 Rhodin is the ex-captain of The Rhodin Revolution. Rhodin also designed two eggs in the Eggs ahoy! contest hosted by Prometheus; one of which featured Prometheus himself, and the other of which was a self-portrait. She was given a Hypnos doll for her artistry in photoshopping "The Dock Incident", in which Hypnos, asleep at the wheel of a sloop, is depicted crashing into the docks of Sakejima Island, injuring some greenies in the process.[1] She also entered into the Spring Screenshots contest[2][3], and some of her screenshots are included on the site. Her stated mission is to overrun the oceans with blonde, well-tanned pirates.