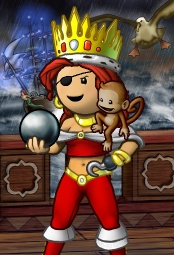 Raucousred been sailing the Midnight Ocean since the spring of 2008. She is senior officer and siren of the crew Raisin' a Raucous and queen of Menaces.

Raucousred is commonly known as "Red" or "Rau." "Other Red" is common in certain circles. Red can typically be found performing the Gunnery puzzle when she's not navigating. The crazy pirate often sings softly to the guns, or kicks them when they misbehave. Red is also fond of doing such raucousy things as riding cannons like mechanical bulls or standing on tables singing.

Some of her favorite songs include:

♪ Some pirates are locked down, and some are free. As fer me, I'm married to the sea ♫.

♪ We got the crazy crew. You think you coming but we say, "na, na, na." We got the block locked up ♫

Raucousred sails mostly with the fine mates of Raisin' a Raucous and other Menaces crews. She's a CI junkie and is often seen at the helm with Natesummers making sail tox. She also likes to sink botes in a flotilla or in Haunted Seas on occasion.

She has lost an eye, a leg and a hand to sinks. She is also a bit of a trophy junkie. Raucousred and Raisin' a Raucous also spend a lot of time in Atlantis with Bigmacattack of Scorpion Scoundrels where she won an aqua ippolito for outstanding gunning. The ippolito was later exchanged for Mojo, a tan monkey, and an undisclosed amount of PoE.

Red is not much of a carouser, as she prefers riding the waves, but she does know a good flop when she sees one and has been known to shoot the moon from time to time. In addition to running stalls and shops, Raucousred has served as governor of Beta Island and Remora Island..