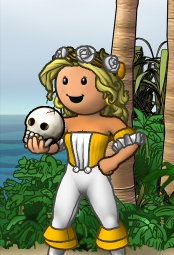 Prudance is Captain of the crew Phoenix Rising. However, she isn't always wearing the special hat, she in fact shares the responsibilities with her partner in arms Malliik so they alternate who wears the hat, and who buys the more expensive badge. She is a princess of the flag Black Flag on the Emerald Ocean.

Starting her career on Sage, Prudance went through a few crews before swapping to Hunter. She continued through another few crews never really finding a home until she was invited by the son of the Captain in the crew Phoenix Rising. Feeling at home, Prudance joined the crew as an officer and set about making a name for herself. With Malliik as Captain, Prudance began working her way up the ranks until she was soon a Senior Officer of the crew. The crew were in the flag Wicked Peace and soon Prudance joined Malliik as a royal in the crew. With her battle navigation and gunning abilities it wasn't long before the islands were in their control. She governed islands such as Manu Island, Hubbles Eye and Alkaid Island. Malliik and Prudance married each other in game during 2008, before taking over the reigns as Captain in 2009. 2010 was a special year for Prudance, not only did she become Queen of the Flag, but Malliik flew out to America to see her (They now live together in the UK happily married). In 2012 the oceans on Sage and Hunter merged together forming Emerald. Shortly after this, Prudance merged her flag into Black Flag. This is not the end of pirate known as Prudance... Merely the beginning

Soulja: A Brown and Lavender Parrot

Viserion: A Navy and Tan Dragon

Prudance is the proud owner of every single limited edition sloop. From Casino to Frost and Ice to Wine, she has them all in perfect condition.

"Prudance and her crew are a massive asset to Black Flag. Whether it is her experience at blockade navigation, or just her general presence on pillages and in chats, she would be sorely missed if she ever walked away." ~Cheryll

"Pru will always remind me of this game and this game her. I owe it to this game that we are together now and for that I love it and her. So here is me thanking this game for bringing me her, right on her page" ~Malliik

Malliik~ The time she complained that the owners of Aimuari wouldn't build her a tailors, so wanted to blockade them. Lead to one of the biggest battles Hunter ocean ever saw.